Posted on 6th April 2015 by Harrogate Nova Posted in News 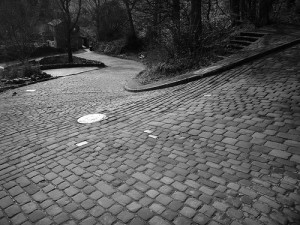 As the pro peloton tackled the Tour of Flanders in Belgium, local riders headed to West Yorkshire to take on the Ronde van Calderdale Sportive.   Two routes were on offer – the shorter ride covering 35 miles with ten testing climbs on both cobbles and tarmac road sections in and around Calderdale, with the longer route featuring thirteen significant climbs on the 72 mile ride to test the skills, stamina and endurance of every rider.  The event, with all proceeds developing riders from the Kirklees Cycling Academy, is among the toughest sportives available in the UK.  Mike Hudson, Mike Worden, Andy Baker and Bryn Bevan were up to the challenge, completing the longer route in times of around five to six hours.  Full details of the rides (and the suffering) over on Strava.

In road racing, Huw Spacey and Dave Morris made the trip to East Yorkshire to take part in the Squadra RT Spring Classic Road Race.  Hamish Graham, Green Jersey RT, was the clear winner on the rolling 50 mile Yorkshire Wolds circuit.  Morris managed to post a strong finish to claim his first British Cycling points of the season, finishing in 14th. 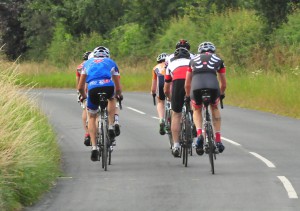 With standing water leading to the cancellation of the Good Friday City of Hull RC 10 mile TT on the fast V718 course, the focus of time triallists turned to the Ilkley CC 25 mile event on Easter Sunday. Duncan Mullier finished 6th (first vet) in a time of 56:52; Richard Hamilton placed 17th with 58:52; Matt Dalby was 27th with 59:38.  Alison Sarmiento was 7th lady with 1:09:45.

The Pennypot chaingang resumes on Tuesday 7th April, and the Pateley chaingang will restart on Monday 13th April – see the ‘club rides’ section of the forum for further details.