Nova Reliability – View from the Grupetto 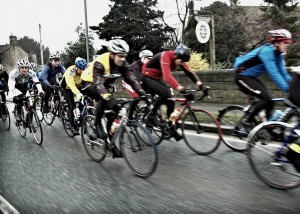 As ever the stalwarts of Nova Margaret and Vaughan gathered the troops, took the money, and wished people well. I had a cold, il faisait très froid!

Bike Mike was fed up of the chit chat, with a raise of his arm akin to an ice road trucker he announced the start, only 15 minutes early but it was cold!

We rolled out, gaps appeared with haste, but the first junction saved us, we re-grouped, I nestled on the inside and only felt half frost bitten. Al Mitch slide alongside me “in the red already” I pant a response, did he mean me or him? He slips by with look of fear on his face, for me I suspect.

We curve the roundabout and before us a blip, so say those on the front whose leg pistons crank up, oblivious to the panting dogs behind. The grupetto is in trouble!

We are saved, cars halt a dash across the ring road for the speedsters, the grupetto clings on, I chew my handlebars a little more, my diesel cells are not designed for this, I need less speed but no chance. We rise and fall towards Wetherby but too much rising for my liking. The Governor eases by me, I think he may have been late, why else would he be behind me, he shouts a cheery hello, I pant back in response, I don’t want to be unsociable but my body is unwilling to any other. He potters on, bionic legs untroubled, I dare to hope by July I may be able to hold that wheel, the biting wind wakes me from my dream.

Another rise, not much, but enough, boom the group splits, Big Mike and his and his entourage are not entertaining us for the day, they go, the grupetto pants then sighs in relief. But the grupetto is far from a group, rider’s storm off for extravagant kamikaze solo’s chasing the tornado ahead, they must be mad, they are!

We gather in ones and twos, I marshal a team, teams have been my life, we find a rhythm, still people try to break off the front, we prepare their strait jackets. We turn into the wind, oh what a northerly wind, I wonder if Norse has left on his hair dryer on. The motley team gathers strength; well numbers, six of use provide momentum at the front, the rest hover at the rear either unable or unwilling. At this point I am blown away, no not the wind, but young Luke, the size of the Boss when he wore short trousers; he does his turns grimacing into the head wind, he is sure not to be riding in my company in a few years.

We potter on picking up straggles on the way grateful for our wind shield, Fountains Hill unbuckles the pack, it always does, we reach the top, solace provided with a tailwind at last. Team mates now urge each other on, this cycling thing really is catching.

Home beckons for me, literally, not for Norwood, my cold, the cold, has finished me off. I miss the cake….. again!